What if: Someone Else Steals the Spotlight from You? 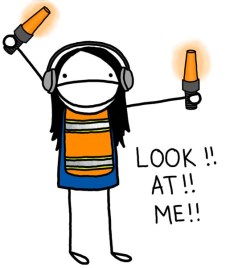 The 2017 panel had mixed responses to this situation. Some people took it in stride or were actually relieved, while others—particularly the Aggressive types—were quite upset.

SITUATION: You’ve just received an accolade for your contribution to the successful outcome of a big project. Proud of the acknowledgement, you share it at a gathering of friends. But your good news is quickly overshadowed when one of the others immediately grabs all the attention of the group. How do you feel? What do you think? And what would you say and do?

Type 1: I would feel disappointed and angry that someone stole my thunder. I’d also be relieved that I could fall back into the background and I don’t have to be the center of attention. So I wouldn’t say anything preferring to fume in private until I can let it go. And I might not let it go.

Type 2: I would feel a little bit like I’d been run over, but I’m usually not a champion for myself, so I would probably figure it’s not a big deal. If it’s that important to you, go for it. I do appreciate recognition, but not enough to fight for it. I think I would let it go and I wouldn’t confront the person unless the situation made me look diminished or small or whatever. Then I would step up and I would be fierce about taking whatever stance I needed to take. (Is that my 8 coming out?) But in general, I wouldn’t waste my time or energy on getting recognition.

Type 3: Hey! It was about me, right? I can socialize, so I wouldn’t really say that out loud, but I would be thinking of how I could find another way to bring this up again. I’d congratulate the other person, but it would be fake.

Type 4: Oh my gosh. I’ve actually had this happen to me and it is just a turmoil of an experience. First I would probably be a little bit relieved because it is hard for me to put myself out there and say Look at me; I did something good, even though I do good things and I do want recognition for them. So I immediately have that dichotomy happening. Then I would get really angry at my “friend,” who could not even stand five minutes of me being in the spotlight. Then I would sit back and seriously ruminate on whether I even want this person as a friend and whether they deserve it and whether they’re always going to do this to me. I’d spend the rest of the evening trying to figure out whether they should even be in my life. Or if they’re toxic.

Type 5: I might be a little annoyed, but I realize that someone else’s accomplishments don’t diminish my own. Plus I’m OK not being the center of attention, so I’m OK with that. Probably I’d congratulate the other person because apparently they like that.

Type 6: I would be really pissed off that somebody stole my moment of glory. I’d be looking for ways to embarrass this clown in front of the others. I would casually join his or her circle and tactfully but pointedly remind them of how little she actually contributed to the project, thereby exposing her to the polite ridicule of her colleagues.

Type 7: I’d be very frustrated and tight-lipped. I would be pissed. I’d be a little like (the Type 3). It’s about me. I would feel disrespected and under-acknowledged and diminished in some way, and depending on how much sleep I’d had, I may or may not react. Most likely I would complain to someone else or privately confront the stealer of my thunder. I would be very gracious in public because it’s all about being social, but privately, they’re in trouble.

Type 8: So I would be slightly taken aback, but I would immediately go to my what-am-I-going-to-do-about-this mode. And I would lead a toast to Connie. Let’s call her Connie. And say I’m so pleased that Connie finally got an acknowledgement of some kind because the rest of us accomplish so much all the time. And I would basically make the point that Connie’s, you know, not that great.

Type 9: I relate a lot to (the Type 3’s) response. I think I would be angry. And then I’d be thinking about how I could bring it up again. Wait a minute; I have something. But in truth, I’m often immediately engaged in how excited they are. And I’m glad for them. I mean How cool! That’s great. Two of us got great stuff.

How do you think you might react in a similar situation? Would you be pleased for the other person? Relieved at being able to recede into the background? Or would you be frustrated and angry?